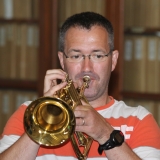 Tom is the Musical Director of The Brass Academy, and is currently Assistant Head at Aldro School in Surrey where among his responsibilities he is the Housemaster, Head of Performing Arts and the Designated Safeguarding Lead.   In addition, Tom freelances in and around London.

He is a member of the prestigious chamber orchestra Britten Sinfonia, and has worked with all the major London-based orchestras, performs regularly in the West End and can be heard on radio, television and on many film scores, most notably 'Lord of the Rings'.

The son of Salvation Army Officers, Tom spent much of his early years in Africa whilst his parents were on missionary duty. His music career started at the age of eight, when he was given a cornet and the chart for the C scale, and told to go away and learn it.

Some years later Tom was awarded a scholarship to study with Ray Allen at the Royal Academy of Music in London. He continued his studies at the Guildhall School of Music and Drama and graduated in 1992.