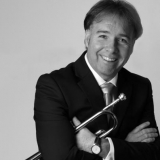 Philippe is the Principal Trumpet with the BBC National Orchestra of Wales, international soloist and Yamaha clinician and artist.

Born in Luxembourg, Philippe developed an early interest in the trumpet from listening to his father play in the village wind band.  His passion was cultivated by his teachers who have included Dino Tomba, a great friend and mentor.  he continued his studies at the Royal College of Music in London with David Mason, then was invited to join the Special Student programme at the Eastman School on Music in Rochester, New York.  A winner of many prizes and awards, he has developed a highly successful career as an orchestral and a chamber musician as well as a soloist.

As a member and Principal Trumpet of the Gustav Mahler Youth Orchestra and as founding Principal Trumpet of the Mahler Chamber Orchestra, until summer 2002 and, currently, of the BBC National Orchestra of Wales, he has performed to much critical acclaim under conductors such as Claudio Abbado, Pierre Boulez and Bernard Haitink. He has given recitals and performed as concert soloist all over Europe, USA and Japan, in addition to issuing five solo CDs. He has also been broadcast on the BBC and numerous European radio and television networks.

Philippe came along to a course run by Tom and Ann in Summer 2011 to give a masterclass and was exceptionally well-received - though he got his biggest cheer when the children learned that they had all heard him playing many times before - on Saturday nights as the theme music from Dr Who filled their sitting rooms!  He has been a leading tutor on our courses ever since, and we are delighted that he will be a tutor with us again in 2020.