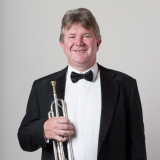 Paul Beniston is Principal Trumpet with the London Philharmonic Orchestra and a Professor at the Royal Academy of Music and the Guildhall School of Music and Drama.

Paul started playing the cornet at Gillingham Salvation Army. He was a member of the European Community Youth Orchestra from 1983–86, and studied Music at Bristol University and the Royal College of Music.

Paul was Principal Trumpet at English National Opera from 1989–93 before joining the London Philharmonic Orchestra as Principal Trumpet in 1994. He is a featured instrumentalist on a number of the Orchestra’s recordings including Karl Jenkins’ ‘The Armed Man’ and Mahler’s Fifth Symphony. He is a soloist on the LPO Live recording of Shostakovich's First Concerto for Piano and Trumpet.

Paul frequently performs as a soloist for the LPO and throughout the UK. His film and television work includes the Lord of the Rings trilogy and the original Champions League anthem. In May 2011 he was involved, with the LPO, in recording over two hundred national anthems for the 2012 London Olympics medal ceremonies.

Paul kindly judged the final of our Summer Course competition at Purcell – a horrible task as all the finalists were exceptionally good, and picking just one winner was challenging to put it mildly!   He became a tutor in 2018, and we are delighted he will be joining us once again in 2020.