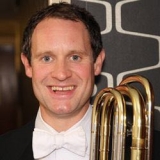 Lyndon is the Principal Bass Trombone with the London Philharmonic Orchestra.

He started playing the trombone aged 8 under the tuition of local peripatetic teachers in Dudley, West Midlands. He went on to gain a place at Birmingham Conservatoire, studying  with Alwyn Green. Whilst at the Conservatoire Lyndon became a regular extra player with the C.B.S.O and other local orchestras and ensembles. A keen brass bander, he spent periods playing with both Flowers and Desford Colliery Brass Bands. Upon leaving college he continued working as a freelance trombonist (amongst other jobs), eventually taking a year's contract with the Gran Canaria Philharmonic Orchestra in 2006.

On returning to the UK in 2007, Lyndon won trials with the BBC Symphony Orchestra, the London Philharmonic Orchestra, and the RTE Concert Orchestra, and was offered the LPO Bass Trombone chair in December 2008.

Lyndon is usually kept very busy with the often hectic orchestra schedule, but when he does get free time enjoys marathon running, sea fishing and pottering around in the garden!