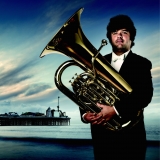 Lee Tsarmaklis has been Principal Tuba at the London Philharmonic Orchestra in 2000. He also teaches at the Royal College of Music.

Apart from being a phenomenal tuba player and a genius at educating young brass players, he is also possibly the nicest man you will ever meet!