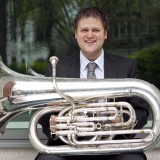 Edward Leech is an orchestral freelancer, chamber musician, pianist and teacher. He recently finished the Master of Arts course at the Royal Academy of Music on tuba with Distinction after achieving a 1st Class honours degree at the Royal Northern College of Music.  Edd has played with the Royal Philharmonic Orchestra, English National Opera, the Aldeburgh World Orchestra and the Britten-Pears Orchestra.

Edward also plays piano on which he won the Woodley Piano Concerto Competition, has played for the Duke of Edinburgh, was awarded the piano accompanying scholarship for four consecutive years at the Royal Northern College of Music and was on a second study scholarship at the Royal Academy of Music. A composer as well, Edward has had his pieces performed by the RCMJD Symphony Orchestra and had a piece performed in collaboration with the Royal Ballet School in London's Covent Garden.