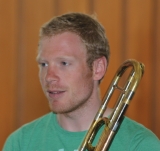 Doug is a freelance Trombonist and Brass Teacher. He has worked with many of the UK’s leading classical ensembles, including the Philharmonia, English National Opera, The Britten Sinfonia, the Birmingham Royal Ballet, the London Sinfonietta and the BBC Scottish  Symphony Orchestra.

After attending Watford Grammar School For Boys, Doug studied at Birmingham University, receiving a B.Mus (Hons) 1st Class.  Here he was tutored in performance by Anthony Howe and Phillip Harrison of the City of Birmingham Symphony Orchestra. He then undertook a Post Graduate Diploma at the Royal College of Music. Here study was taken with Byron Fulcher (Philharmonia Orchestra), Lindsay Shilling (Royal Opera House Covent Garden) and Graham Lee. Douglas graduated from the RCM receiving a PGDIP (Advanced) with distinction. Whilst a student, Douglas won the Royal College of Music Brass prize and was the recipient of an award from the Countess of Munster Musical Trust.

When not playing his trombone, Doug can be seen whizzing past on one of his large collection of bikes!