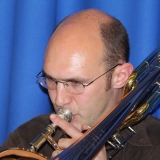 Christian is Principal Bass Trombone at Opera North, having previously held the same position at the Philharmonia Orchestra since 2002.  He is also a past President of the British Trombone Society.  He has worked in chamber groups such as the London Sinfonietta, Britten Sinfonia and Soloists of the Philharmonia, as well as with the CBSO, London Philharmonic, BBC and London Symphony Orchestras.

Christian began playing the trombone at the age of ten, progressing through Staffordshire’s excellent music service before entering London's Royal Academy of Music in 1998. Winning the bass trombone chair in the BBC National Orchestra of Wales in 2001, aged 20, Christian was permitted to complete his studies with Bob Hughes and graduated with first class honours in July 2002, a month before joining the Philharmonia Orchestra in London. After a decade of performing worldwide and a year as deputy chairman, he relocated to Yorkshire with wife Katy Jones and their young family in 2012.

Appointed in 2015 as Bass Trombone tutor at the Royal Northern College of Music in Manchester, Christian also freelances widely and coaches regularly with the Brass Academy and National Youth Orchestra of Great Britain. 2017 saw the launch of his YouTube channel, featuring over 60 videos covering performances of solo works, technical advice and orchestral and opera excerpts.

As a soloist he has served on the faculty of Dublin Brass Week 2015, the Arctic Trombone Festival (Tromso) 2016, Glasgow Trombone Week 2017 and the Hungarian trombone bootcamp 2018, giving two world premieres in Budapest. Christian also takes a keen interest in helping to promote the trombone to the wider public and served as President of the British Trombone Society 2013-15, during which time he appeared as the mystery guest on Chris Evans’s BBC Radio 2 breakfast show to an estimated audience of 9.8 million listeners!

Away from music, Christian loves eating (good food and lots of it), swimming in the sea (the colder the better), chasing around after the kids, and walking, running and cycling in his beloved Peak District!