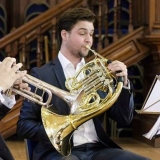 Alex is a freelance horn player and teacher based in London. He works regularly with orchestras such as the London Philharmonic Orchestra, the Orchestra of the Royal Opera House and The London Symphony.   He is also a member of the Bold as Brass ensemble.

Alex graduated from the Guildhall Hall School of Music and Drama's Orchestral Masters course with First-class honours. Alex started playing the horn aged seven in Southampton and progressed through the city's music service until he was 16. He then went on to study at the Junior Royal Academy of Music. At 18 he started at Guildhall School of Music and Drama under Richard Bissill and Jeff Bryant where he gained both his undergraduate and masters degrees.